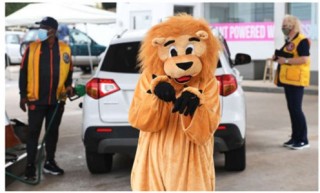 More than $20,000 was raised for charity on Saturday in the 53rd annual Gas-O-Rama event organised by the Hamilton Lions Club.

A spokesman for the club said they had been able to sell 4,000 raffle tickets in addition to other donations.

The fundraising event came about through a partnership between the Hamilton Lions Club and Terceira's Rubis Service Station on North Shore in Smith's.

As part of the event, club members volunteer to pump gas for the day to earn a portion of the day's earnings plus tips for charity.

As part of the event large Lions Club flags were placed outside the gas station, along with an army of lawn flamingos.

The annual Gas-O-Rama event began in 1969 through a partnership between the gas station's former owner, the late Malcolm Terceira, and Edward "Teddy" Chapman, a member of the club.

What started as a friendly poker bet has raised more than $1 million for charity over the years since.

Beneficiaries this year are Vision Bermuda and the Bermuda Zoological Society.

Check our full schedule of classes, social activities and events!